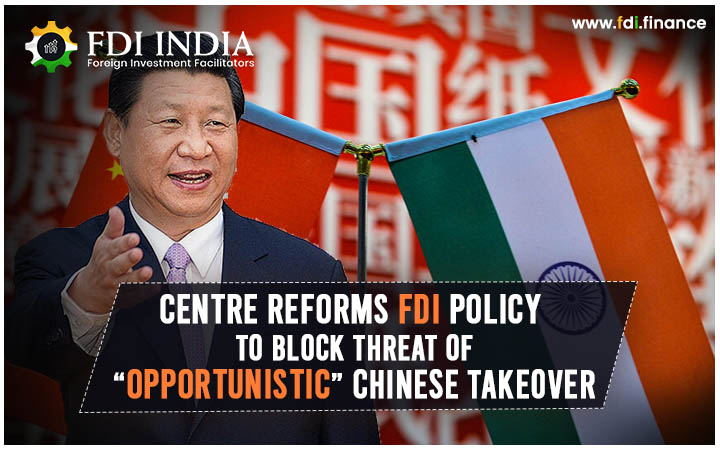 Alarmed by the “opportunistic” raising stake of the People's Bank of China (PBoC) in India's largest non-banking mortgage provider HDFC, the centre on Saturday revised its foreign direct investment policy. With respect to the amended policy, investments by entities from countries that share a border with India will now require a clearance from the Centre.

This move is being viewed as an attempt to put an end to the looming threat of Chinese takeover of Indian companies, whose valuations have been badly hit by the deadly COVID-19 pandemic.

The amendment to the FDI rule states, "A non-resident entity can invest in India, subject to the FDI Policy except in those sectors/activities which are prohibited. However, an entity of a country, which shares a land border with India or where the beneficial owner of investment into India is situated in or is a citizen of any such country, can invest only under the Government route.”

One more significant change the Centre has made to the FDI policy is blocking the indirect acquisition of investments by entities based in China. This means that now the change in ownership of the investment will also have to be cleared by the Central government. The changes were meant to curb "opportunistic takeovers/acquisitions," said the government.

The revised rule says, "In the event of the transfer of ownership of any existing or future FDI in an entity in India, directly or indirectly, resulting in the beneficial ownership falling within the restriction/purview of the para 3.1.1(a), such subsequent change in beneficial ownership will also require Government approval.”

Pakistan and Bangladesh, which share a border with India were already covered by the same rule. It is interesting to note how the government has refrained from directly naming China in the reformed policy and instead termed it "country which shares a land border with India.” The new policy now applies to China, Nepal, Bhutan and Myanmar.

Over the years, India has regularly liberalised foreign direct investment norms and policies. Most FDI equity inflows made into the country are under the automatic route, where a prior approval from the government is not required. The new reform indicates the concern that China might move to acquire Indian companies by exploiting their financial vulnerability at trying times like these. The COVID-19 pandemic, which first originated in the Chinese city of Wuhan last December, has brought the globe to a standstill. So far, the highly contagious virus has infected over 24,07,340 people worldwide.

On the other hand, China was left fuming over the new reforms in India’s FDI policy, calling it “discriminatory.”

"The additional barriers set by Indian side for investors from specific countries violate WTO's principle of non-discrimination, and go against the general trend of liberalization and facilitation of trade and investment. We hope India would revise relevant discriminatory practices, treat investments from different countries equally, and foster an open, fair and equitable business environment," the Chinese Embassy said in its statement.

There have been reports of growing concerns around the globe of China taking advantage of the COVID-19 pandemic by buying cheap, distressed assets. Chinese companies have taken to buying out financially distressed companies that are an inevitable and unfortunate result of the deadly virus. In the wake of this, Australia and Germany have reportedly tightened their FDI policies in recent weeks to protect their companies.