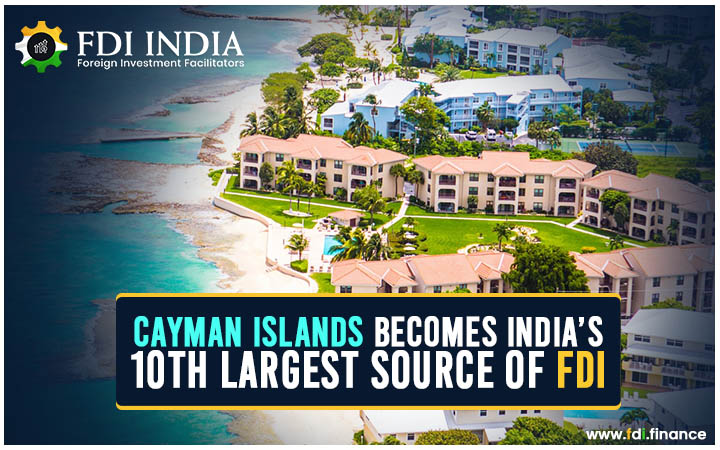 Western Caribbean Sea’s Cayman Islands has now become the 10th largest contributor of foreign direct investment or FDI in India, leaving behind major economies such as South Korea and the United Arab Emirates.

In the fiscal year 2019-20, foreign direct investment equity inflows surged by 14 per cent—four-year high, to a record USD 49.8 billion, as per the data released by the Department for Promotion of Industry and Internal Trade (DPIIT) on Thursday. Estimates from the DPIIT also indicated that inbound FDI from tax havens spiked unprecedentedly in 2019-20.

These figures are expected to come as a sigh of relief for policymakers who were concerned about tepid growth in equity investments, which had contracted by 1 per cent in 2018-19 and risen only 3 per cent in the year before that.

However, Business Standard quoted sources as saying that the DPIIT is wary of inflows shooting up from tax havens, generally defined as a country or place with very low effective rates of taxation for foreign investors. “We have noticed the increasing incidence of potential round tripping of profits by Indian companies. This will be discussed with the Corporate Affairs Ministry,” said a senior official. Even if seen as pure investments by foreign entities, these flows tend to be volatile and unsustainable, he added.

FDI equity inflows from the sunny Caribbean jurisdiction in FY 2019-20 amounted to USD 3.7 billion— a 267 per cent increase from the USD 1 billion in the fiscal year 2018-19. The popular offshore tax haven poured in USD 262.5 million, a small figure until someone considers that it only contributed USD 46 million in 2018-19.

The Netherlands and Cyprus, as of March 2020, continue to be top contributors of foreign direct investment in India. The Netherlands is the 3rd-largest source of historical FDI in India, accounting for a significant 7.2 per cent of all FDI into India since 2000. FDI from Cyprus, which is the eighth-largest source of funds also surged. Equity worth USD 879.4 million came in from the Mediterranean nation, up from $296 million a year back.

In 2020, Singapore retained its position as the largest contributor of FDI in India with investments worth USD 14.6 billion, followed by Mauritius at USD 8.2 billion.

“Inflows from Mauritius have been affected after the agreement on double taxation avoidance was signed in 2017. Now, significant FDI is coming from Singapore because of round tripping,” said Biswajit Dhar, senior trade policy expert and Professor at Jawaharlal Nehru University.

FDI from China. however, has taken a hit following the amended to the FDI policy by the Indian government. Now, investments coming from countries sharing a border with India will have to take the government approval route for FDI.

IN 2019-20, total FDI into India, which includes equity capital of unincorporated bodies, reinvest earnings, and other capital, stood at USD 73.4 billion, up from USD 63 billion a year ago, an 18 per cent jump.