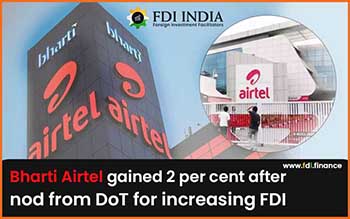 On Wednesday, telecom giant Bharti Airtel gained 2 per cent after it received a go-ahead from the department of telecom (DoT) for hiking foreign direct investment limit in the company from the earlier 49 per cent to 100 per cent.

Although, as the session progressed, the scrip erased gains. The stock increased 2.47 per cent in early trade and hit a high of Rs. 524.

The Reserve Bank of India (RBI) has also given its approval to the telecom operator to hold up to 74 per cent stake in the company by foreign investors.

"Bharti Airtel Limited has received the approval from the Department of Telecommunications (DoT) vide its letter dated January 20, 2020, for increasing the limit of foreign investment up to 100 per cent of the paid-up capital of the company," the filing said.

This approval comes just a few days ahead of when the company is set to clear statutory liabilities amounting to nearly Rs 35, 586 crore, out of which Rs 21,682 crore is licence fee and aother Rs 13,904.01 crore is spectrum dues (excluding the dues of Telenor and Tata Teleservices).

"...the aforesaid approval read together with the RBI approval dated July 3, 2014 granted to the company allows the FPIs/FIIs to invest upto 74 per cent of the paid up capital of the company," it said.