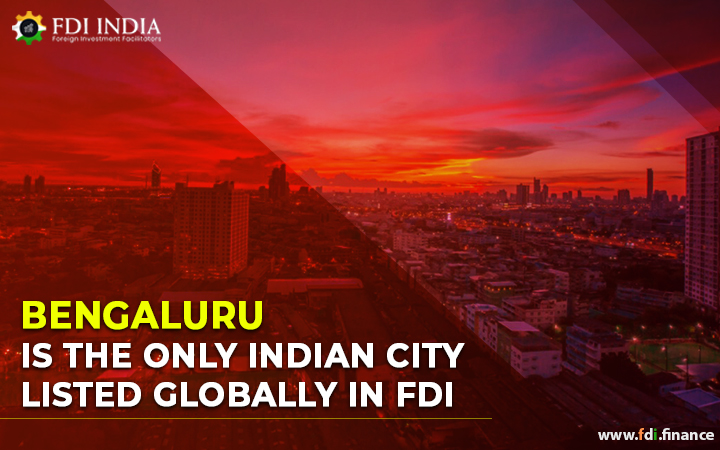 Bengaluru Is the Only Indian City Listed Globally in FDI

Bengaluru Is the Only Indian City Listed Globally in FDI

Bengaluru embellish various titles and has added one more title on Friday. Bengaluru was placed 13 on the global list of the future ranking in the Indian economy and Foreign direct investment which was issued by the Knight & Frank. While showering the recognition industry representatives specified to the government that a lot more need to be done to preserve and develop the city.

Singapore has ranked fourth consecutively followed by London and Dubai. Bengaluru is the only city to be listed in the country. After the release of the report, B Sriramulu and Jagadish Shekhar tweeted to celebrate the achievement. IT-BT Principal Secretary Gaurav Gupta stated that the list is a crucial criterion which represents how the investment guild is looking at the city and acknowledges the high recall value. The challenge is to safeguard the sustainability and improvement he mentioned. Mohandas Pai, chairman, Manipal Global Education Services, mentioned that ‘Bengaluru has the highest number of the technology around 20 lakhs, it consists of 25,000 IT companies and acquires $5-6 billion FDI every year. Bengaluru has utmost startup and ecosystem, talent pool.

Apart from the 12-13 million sq ft area used for office purposes, T.V Mohandas Pai stated, the government should invest better in Bengaluru. Metro Rail work is slow, the city requires a quick metro line. Singapore is ranked number 1 as the government works there. Politicians and leaders should act together. Kiran Mazumdar-Shaw, Chairperson and Managing Director, Biocon mentioned, Karnataka has a start-up policy which is being followed by the centre. The finance ministry should enhance investment in the start-up so that Indian cities like Pune and Hyderabad should get recognition as well.

She stated Bengaluru has an utmost start-up system and the talent pool is splendid here, A similar system is not there in the other cities. Bengaluru has the risk-taking calibre which makes it an ideal place. The millennial and cosmopolitan cities make it suitable.