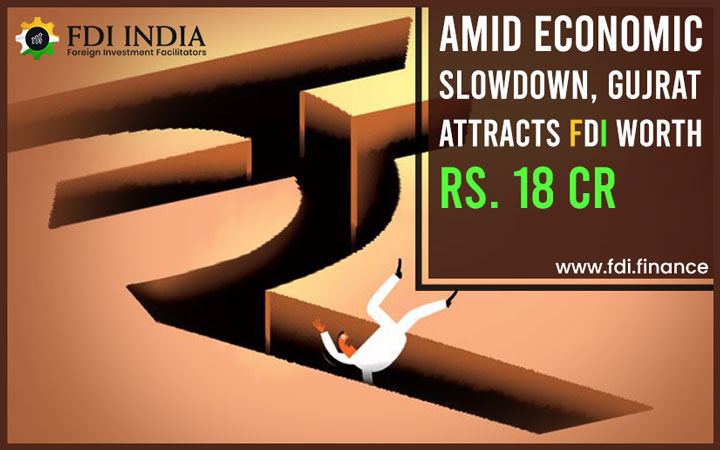 Gujrat has attracted foreign direct investments that amount to Rs. 18,325 crore in the first quarter of the current financial year amid news of an economic slowdown. In the financial year 2018-19, the state had received overseas investments worth Rs. 13,457 crore, considerably less than this year’s inflows. The existing years FDI is 36 per cent more than that of last years.

A total of 45 companies in Gujrat have made foreign direct investments, out of which about 124 companies have invested in the first quarter of the existing financial year.

According to government sources, total inflows from foreign direct investments are expected to cross Rs 50,000 by the end of the financial year.

They also pointed out the significant increase in FDI equity inflows into Gujrat in the first quarter of the current financial year as compared to the corresponding period last year.

According to the Department of Industrial Policy and Promotion (DIPP), the state has received foreign direct investments worth Rs. 18,325 under the Reserve Bank of India’s (RBI) automatic route of approval in the first quarter of the current financial year as compared to the FDI equity inflows of RS. 13,457 crore from the previous financial year of 2018-19.

Manoj Das, the principal secretary of the industries and mines department said, “Usually, companies of one or two countries dominate the FDI list, but we have received investment from diverse countries. As many as 28 countries have made FDI in Gujarat.”

The official added, “Compared to national level actual foreign direct investment, Gujarat has the highest investment in the first quarter. The FDI has come in manufacturing, food processing, IT, ITES and financial sector services, research, real estate and other sectors.”

Last year, foreign direct investments in India witnessed a dip of 1 per cent for the first time in over 6 years. To correct this decrease, the government of India recently introduced several reforms in FDI norms across sectors like single brand retail trade, digital media, contract manufacturing, and coal mining in the hopes of attracting more foreign investors.