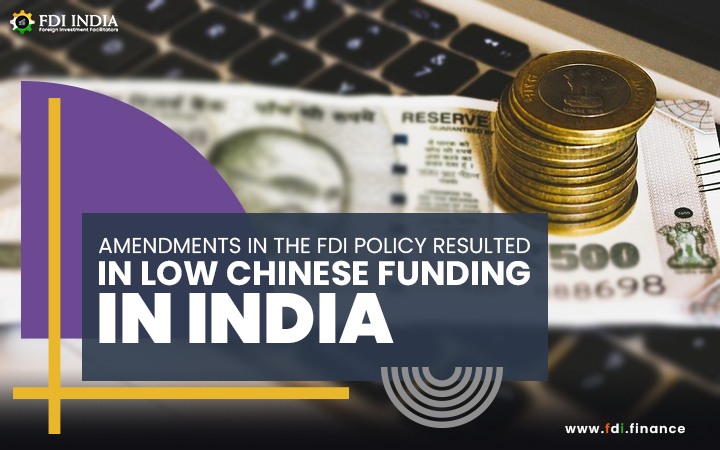 In 2020 there has been a dip in the Chinese investments in Indian startups due to the amendments made in the FDI policy of India. Earlier there was no rule of undertaking government approval for investments coming from the neighboring countries of India but due to the pandemic and border clashes with China, the Indian government made the canes in the FDI policy by making government approval mandatory.

Data from Venture Intelligence sows in 2019 China invested $197 million in Indian startups whereas in 2020 between January-July $166 million was invested in the startup economy of India.

In 2019 itself Chinese investor’s had invested a total of $641 million in the startups of India. April’s onwards there is a downward trend in the investments coming from China due to the policy canes made by the Indian government.

The aim of the government for making into effect the cane in the FDI policy was due to clashes with China. Many Chinese investors are now not interest to make investments in China until there is any clarity.

Siddharth Pai, Founder partner of 3one4 capital said "Chinese investors who had been looking at companies in the consumer Internet space, as well as some elements of deep tech, wanted to close those deals as soon as possible. After the Press Note, 3 announcements were made a number of these deals to put into the back burner because of the uncertainty generated by it."

He said, "I don’t foresee their enthusiasm going away anytime in the future unless of course, there are political considerations that come into the picture from either side".

The repercussions of the government imposing restrictions on investments coming from the neighboring countries have shown that some Indian startups are saying no to Chinese investments.

Bolo India’s founder Varun Saxena as said that their company has taken the decision of not taking any Chinese investments till more clarity is received on the regulatory scenario.

Just by rejecting investments from China cannot be the issue for the Indian startups as even the American and European investors are facing issues due to the new canes in the FDI policy as they have raised money from Chinese firms.

Vaibav Kakkar, Partner at Law firm L&L Partner said "Merely as a result of minority participation from certain Chinese limited partners whose interest in these polled investment funds are simply passive with no ability to control or direct the operations of the funds, such private equity funds despite not having their origin under any land border country, are also being required to needlessly seek prior government approval before making an investments in India. In fact, several applications from various private equity and VC funds for seeking clarifications/approvals are currently pending with the government."

There is no clear demarcation of the thresholds for determining for which investments the government approvals are required. Investments are being delayed due to the cane in the policy made by the government.

The Indian startups economy has seen the Chinese investments in the previous years.

In 2019-2020, investments in companies like Udaan, Delhivery, Swiggy, BigBasket and Meesho have had investments from Chinese investors such as Tencent, Hillhouse Capital, Fosun Group, Tencent, Alibaba, and Shunwei Capital.