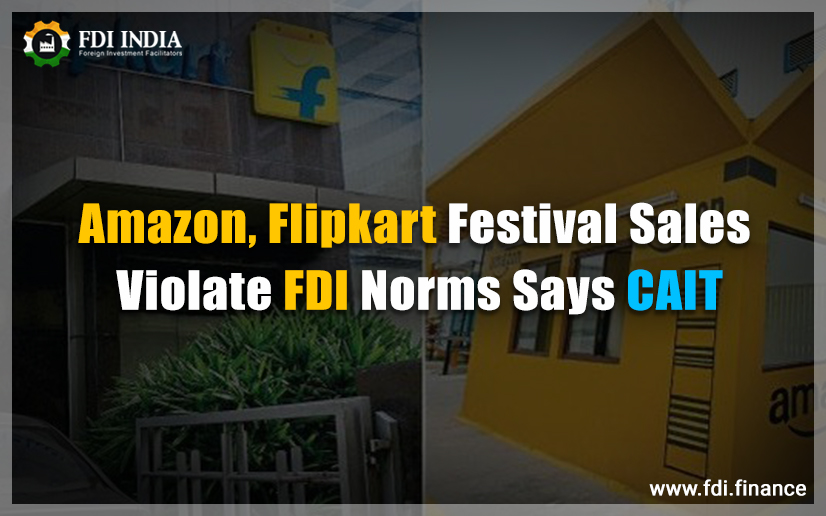 On Monday, the Confederation of All India Traders (CAIT) said that Amazon and Flipkart, through their festive season sales are violating foreign direct investment norms. The confederation has previously demanded a ban of these festive sales.

The trader’s body requested the Commerce Minister to look into this violation of overseas investment norms and policies by the two e-commerce giants and urged him to declare a ban on such festive sales. Apart from this, they also asked the government to initiate an investigation into the business models of these firms.

A statement released by the CAIT said, “Holding such sales and offering deep discounts are clear violations of Press Note No.2 of FDI policy 2018. The CAIT has earlier written to Union Commerce Minister Piyush Goyal to ban the declared festival sales by these e-commerce portals.”

Praveen Khandelwal, Secretary General of CAIT strongly opposed the recent statements of Amazon and Flipkart that surfaced on the media a few days that said that they empower the sellers on their respective platforms to decide the prices and offer their choice of selection to consumers at the prices they deem fit.

"The said statement of both the companies are devoid of any logic and just an eye wash to keep right the wrong practices they are conducting on their platform," it said.

Khandelwal further said that these giant e-commerce companies are taking part in blatant violation of FDI policy of the Centre. Outlining the foreign direct investment policy, CAIT said that he main provisions of the FDI policy say that 100 per cent FDI is permitted in the e-commerce marketplace model, under which e-commerce platforms such as Amazon and Flipkart can only act as technical platforms.

"Such festive sales offering deep discounts are nothing but influencing the prices directly or indirectly which is a clear violation of the policy," it said.