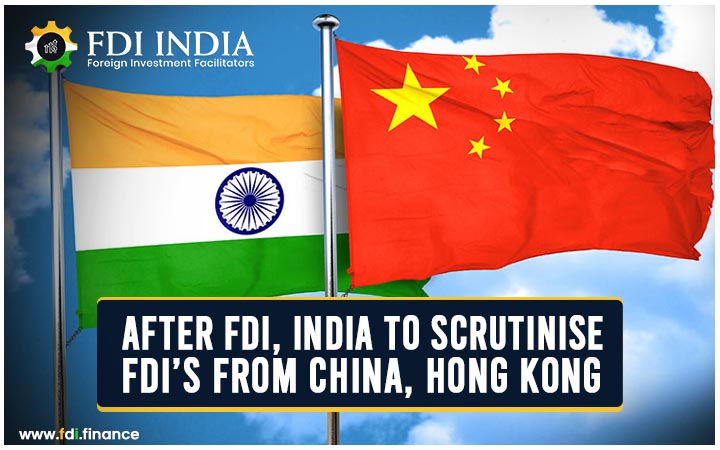 After FDI, India to Scrutinise FDI’s from China, Hong Kong

After FDI, India to Scrutinise FDI’s from China, Hong Kong

After making approval from government route mandatory for foreign direct investments from countries sharing a border with India, the country is considering additional checks on foreign portfolio investments from China and Hong Kong.

Concerns surfaced after China’s central bank raised its stake in Housing Development Finance Corp (HDFC), following which the finance ministry held talks with the commerce and industry ministry, SEBI and RBI on the proposed framework. The People’s Bank of China had increased it to more than 1 per cent rom about 0.8 per cent, requiring a declaration by the Indian mortgage lender to stock exchanges.

“The Department of Economic Affairs is working on the FPI issue. It is not finalised yet,” a government official told ET.

After this, foreign portfolio investments from China and Hong Kong may have to undergo stricter know your customer (KYC) norms at the time of registration. Additionally, separate mechanisms could also be put in place to ensure prior regulatory or government clearance for investments in listed entities.

The framework may put up a decimated team to scrutinise new FPI registrations and investments from these countries.

“The government and market regulator have already begun collecting details on Chinese investments and ultimate beneficial owners of FPIs based in China through Sebi, and this additional data gathering is aimed to create barriers for Chinese investors,” said an expert on foreign investment. “Chinese funds have begun slowing their investments in India and are in wait-and-watch mode.”

This comes amid fears that China may acquire stakes in strategically important companies at a time when stock prices are volatile due t the looming uncertainty caused by the COVID-19 global pandemic.

The government of India has made reforms ti existing foreign direct investment policies in a bod to are off “opportunistic take-over” of indian assets by Chinese companies at a vulnerable time such as this.

The COVID-19, which originated in the Chinese city of Wuhan last December has so far infected more than 5 million people globally. The resulting lockdown from the outbreak has halted business activities, putting millions out of job.