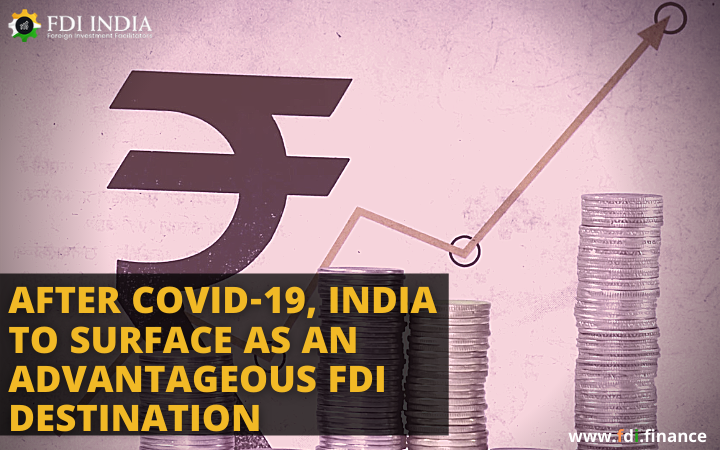 After COVID-19, India to Surface as an Advantageous FDI Destination

After COVID-19, India to Surface as an Advantageous FDI Destination

India has been on top of the list of favorable destinations for foreign investors due to a variety of factors. India has been performing well and emerging as a great market for foreign goods and many countries are showing immense trust in the Indian economy.

What make India so attractive for investments are the liberal FDI policies, banking system, government reforms for the betterment of the business environment, and the huge consumer market of India. COVID-19 has not only shaken the domestic economic environment but also the global economic environment as well.

There has been a major change in the global supply chains, business environment, and international trade order due to the pandemic. India is emerging even in these difficult times for the global companies.

The world has turned sour to China as due to the country COVID-19 got transmitted to various countries and an early warning to the pandemic could have saved over thousands of lives.

Various nations are rethinking their dependence on Chinese goods and supply chains.

India has been giving its best in order to persuade potential investors for establishing their base in India through various schemes. The government of India has its major focus on increasing manufacturing in India through the motto of Make in India launched by the honorable Prime Minister.

Transaction costs will be reduced for investors through the establishment of a land pool of 461,589 hectares by the government exclusively for the new investments. These measures that are taken by the government to boost manufacturing in India is getting a positive response from foreign investors.

More significant developments have to be made in the manufacturing sectors to achieve high FDI. The government has also launched an incentive mechanism in sectors such as mobile phone manufacturing, pharmaceutical drugs and medical devices that has attracted investors that want to invest in these sectors.

The main aim of the government is to make reforms in the manufacturing sector. There are also many upcoming government schemes that will further add value in making India a favorable destination for FDI and also emerge as an alternate for the foreign investors and companies to set base in India from China.

Amongst the other countries, India is the one with the liberal FDI policies as in India in some sectors the government has allowed 100% foreign investments via the automatic route in which the foreign companies are not required to take any permission from the government in order to invest.

There are some sectors given by the Government of India in which the foreign investments can only be done after the government’s approval but majorly the sectors fall in the automatic route.

In addition to FDI reforms, the government launched the Atma Nirbhar scheme by the Prime Minister, and the further announcement of up to 74?I in the defense manufacturing sector shows the intent of the government of launching schemes to attract foreign investors.

There are many ways in which India is not leaving any opportunity to improve economic growth and attract FDI to the country. On the national and global platforms, India has been inviting businesses to the country with open arms.