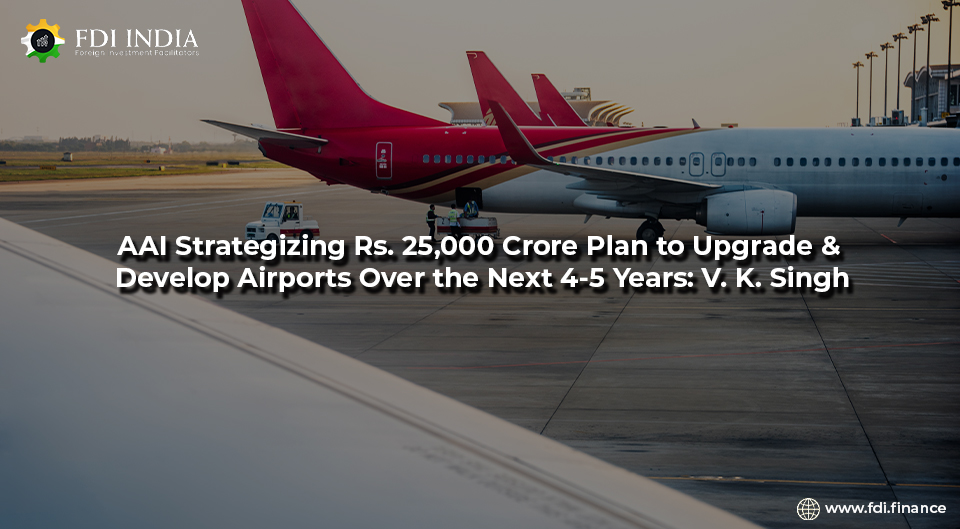 Minister of State in the Union Ministry of Civil Aviation V. K. Singh shared in the Rajya Sabha that the Airport Authority of India (AAI) has undertaken the development of new airports and the upgrade/expansion of the existing ones at an approximate cost of Rs. 25,000 crore over the next 4-5 years.

As per the current foreign direct investment (FDI) policy, up to 49 percent FDI is permitted in scheduled air transport service and domestic scheduled passenger airline under the automatic route, and up to 100 percent is allowed through the government route.

Additionally, three Public Private Partnership (PPP) airports at Delhi, Hyderabad and Bengaluru are under various stages of planning or development. These airports will be built at an estimated cost of Rs. 30,000 crore by 2025.

The Greenfield Airport Policy, 2008, lays down the guidelines for the establishment of new Greenfield airports. It states that an airport developer, including the State Government, who plans to establish an airport must send a proposal to the Ministry of Civil Aviation (MoCA). After that, it goes through a two-stage process for approval that includes the ‘site-clearance’ stage and the ‘in-principle’ approval stage.

As per this policy, the MoCA has granted the ‘in-principle’ approval for the setup of 21 Greenfield airports. The locations are Mopa in Goa, Navi Mumbai, Shirdi, Sindhudurg in Maharashtra, Kalaburagi, Bijapur, Hassan and Shimoga in Karnataka, Datia (Gwalior) in Madhya Pradesh, Kushinagar and Noida (Jewar) in Uttar Pradesh, Dholera and Hirasar in Gujarat, Karaikal in Puducherry, Dagadarthi and Bhogapuramand Oravakal in Andhra Pradesh, Durgapur in West Bengal, Pakyong in Sikkim, Kannur in Kerala and Hollongi (Itanagar) in Arunachal Pradesh.