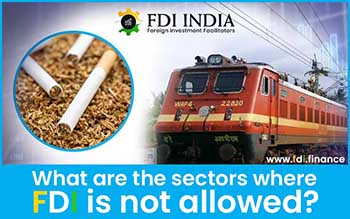 One important characteristic of FDI is lasting interest. Foreign direct investment is, therefore, differentiated by foreign portfolio investment by the notion of direct control. Hence, a prerequisite of FDI is at least 10 per cent voting rights to the foreign investor.

An integral part of a country’s economic development, FDI has a direct positive impact on domestic capital, productivity, and employment. This is the reason why it has become an indispensable tool for initiating economic growth for countries.

According to the annual report released by the Department for Promotion of Industry and Internal Trade (DPIIT), India received foreign direct investments worth USD 286 billion in the past five years. The country is one of the most attractive destinations for FDI. India opens up most of its economic sectors for foreign investment barring some.

In different sectors, different % of FDI is allowed and is not fixed. While some sectors or industries allow 100% FDI, the percentages of other industries may vary from 26% to 51%. However, there are some industries where the Government of India strictly prohibits FDI. These industries are as follows:

The Indian government has over the years taken several measures to ease foreign direct investment policies in order to facilitate more overseas equity inflows into the country. Recently, several reforms in FDI norms were introduced across sectors such as digital media, single brand retail trade, contract manufacturing, and coal mining.

As we step into a new year, a new budget is awaited and with it new reforms that may be introduced.