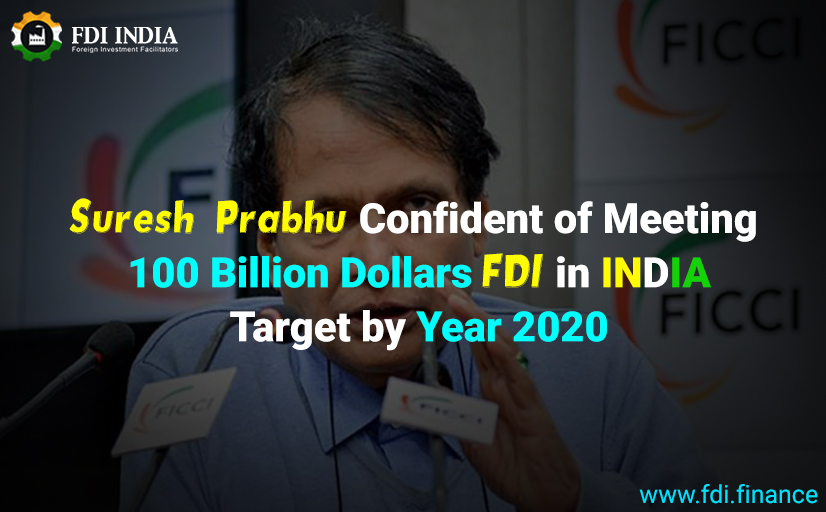 Commerce and industry minister Suresh Prabhu in Feb 2019 said the government has set a target of attracting 100 billion dollars’ worth foreign direct investment into the country by the fiscal year of 2020.

The minister said that the government is working on a blueprint in order to attract the set target and is conducting sector analysis for oversea investments. The government is also preparing suitable policies which will help bring in significant FDI equity inflows.

“We have removed almost all sectoral restrictions. I have asked Invest India to identify those who can get that amount. I am getting research done on companies who have the cash, where they will invest, what is the sectoral intent and I am personally talking to Fortune 500 companies and requesting them to come. We will make sure that we will take it to a new level,” Suresh Prabhu said at the Global Business Summit.

“We have achieved record FDI inflows last year. We have set a target and are already working on bringing in USD 100 billion FDI (by 2020),” Prabhu said at an Indian Chamber of Commerce event.

Last August witnessed the biggest foreign equity inflows into the country thanks to the 16 billion dollar deal between Walmart and Flipkart. For the first time in two decades, India took over China with 38 billion dollars in inbound foreign direct investment deals compares to China’s 32 billion dollars.

Other major deals included Unilever buying out GSKs consumer business in the country for over Rs 31,700 crore, Schneider Electric, TPG Capital, KKR, Softbank, and Alibaba among others.  According to Prabhu, the government is preparing suitable policies and norms in order to attract FDI in India.