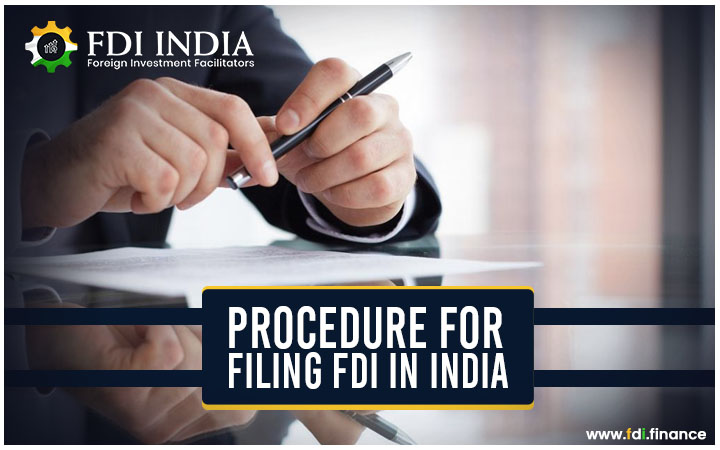 FDI (Foreign Direct Investment) is a segment of investment by one company to a different economy with the objective of earning profit. It is a form of direct investment in a country (host country) by a company which is situated at a different country (foreign country). Most of the well reputed and prominent entrepreneurs usually follow this strategy of foreign direct investment in India in order to enhance their business operations for generating growth in business. Due to several business advantages like tax exemptions, cheap wages etc. the target countries offer FDI investors and invite foreign investments in the host countries for business growth.

Many developing countries like India follow the procedure of FDI with regard to boost their different segments of the domestic economy. Here, below we bring you detailed aspects of procedures to be followed for Foreign Direct Investment in India.

Steps to filing FDI in India

As per Reserve Bank of India’s regulations before any Indian company starts receiving foreign investment from any of the foreign bank accounts the following details need to be approved.

-To submit FDI intimation forum within the 30 days from the date of crediting amount along with covering letter, FDI initiation forum containing details of both company and foreign inward remittance certificate.

-Within 180 days from the date of receiving foreign funds; FCGPR FORM (Foreign Currency-Gross Provisional Return Form) needs to be filed through the bank. For which following documents are required like :

-Form FC-GPR with Part A
-Covering letter
-Company Secretary Certificate that mentions the particular company receives foreign investment.
-Original FIRC
-Copy of application of received funds to RBI.
– Need to submit KYC which we already followed in above as sent by remitting bank to Beneficiary bank.
-Memorandum of Association
-Board Resolution that allows FDI in India

Government Route:
Sectors and economic activities which are not covered under the respective FDI policy need to apply for FDI approval from the Government of India that control, maintain and administered by the Ministry of Finance, Foreign Investment Promotion Board and Department of Economic Affairs.

Automatic Route:
For all economic activities and sectors which are specified under the consolidated FDI Policy which is issued from time to time by the Government of India. This route is meant for those sectors and activities which do not require approval from RBI or from the government for carrying FDI.