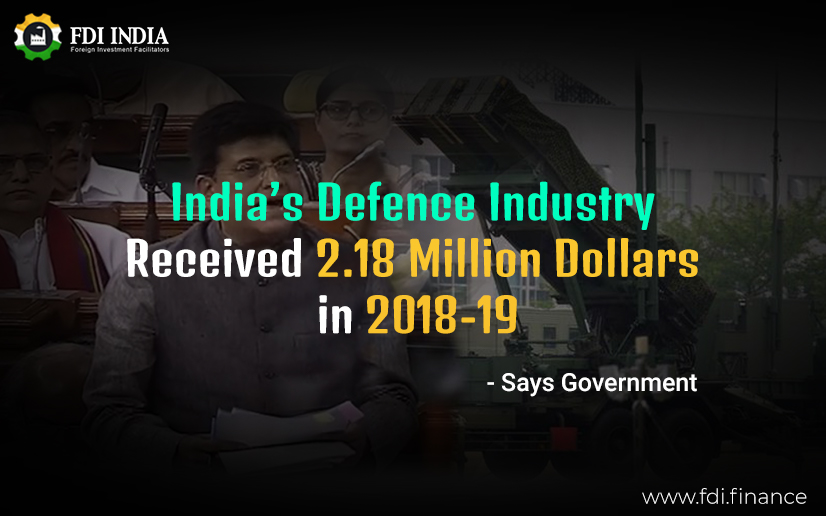 The defence industry on India received foreign direct investment (FDI) amounting to the meagre sum of 2.18 million dollars during 2018-19, the Parliament was informed.

In the duration of 2016-17, the defence sector had failed to attract foreign direct investments.

Other sectors to receive nil equity inflows during the last fiscal year include, photographic raw firm and paper, and coir.

According to current FDI policies and norms, foreign investments beyond 49 per cent is permitted in the defence sector through the approval route.

The limit for overseas investment in the defence sector has also been made extended to manufacturing of small arms and ammunition’s covered under the Arms Act of 1959.

According the recent data released, foreign direct investment equity inflows declined for the first time in the last six years during the period of 2018-19. FDI inflows fell 1 per cent and currently amounts to 44.37 billion US dollars. FDI is said to have decreased significantly in the telecommunications and pharmaceutical sectors.

Since the opening up of the economy in 1991, the government of India has taken steps to ease foreign investment norms and policies in order to encourage an increased flow of FDI into the country.

A strong inflow of foreign investments is a critical driver o economic growth and helps improve the country’s balance of payments situation and strengthens the value of rupee against global currencies, especially the United States (US) dollar

Replying to a separate question, the minister said that a representation/request regarding the establishment of an industrial park at Kolar Gold Fields has been received. Also, recently, au contraire the defence sector, FDI in services sector went up by 37 per cent in 2018-19. Services sector includes finance, banking, insurance, outsourcing, R&D, courier, tech testing, and analysis