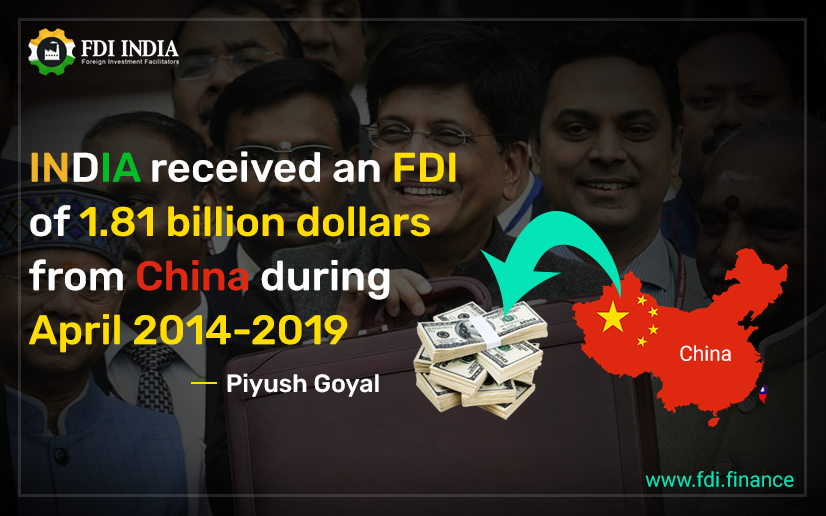 India has received foreign direct investment of USD 1.81 billion from China during the period of April 2014 to April 2019.

Sectors receiving the highest foreign investment equity inflows from China during this period include the automobile industry with USD 876.73 million, electrical equipment with USD 152.5 million, and services sector with inflows amounting to USD 127 million.

These figures were provided by the Commerce and Industry Minister Piyush Goyal in a written reply to the Rajya Sabha.

Apart from this, India also received foreign investment worth USD 13.62 billion from the United States of America during the period. The sectors that saw a significant equity inflow include computer software and hardware, automobile industry and services sector.

As per the data given by the Department of Promotion of Industry and International Trade (DPIIT), total inflows of FDI in India stood at USD 44.37 billion in 2018-19.

Data for the period of 2018-19 indicates that the services sector attracted the highest FDI equity inflow of USD 9.16 billion, followed by computer software and hardware which attracted USD 6.42 billion, trading stood at USD 4.46 billion and telecommunications at USD 2.67 billion. Most recently, the total FDI equity inflows for the month of March 2019 touched USD 3.60 billion.

The countries contributing the highest FDI equity inflow into the country during 2018-19 are:

India is an attractive destination for foreign investments. Foreign investors take advantage of the country’s relatively cheaper wages and investment privileges offered by the Government of India like tax exemptions.