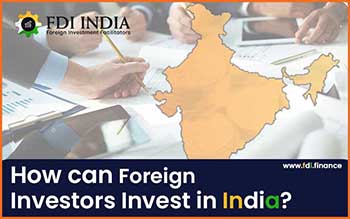 FDI or foreign direct investment is the investment by an entity (individual or firm) based outside the country where the investment in being made. Apart from being a critical driver of economic growth, FDI bring in managerial know how, new job opportunities, an inflow of new technology, tech expertise and also results in improved infrastructure.

India opened up the economy in 1991 and ever since then, the government has been introducing several reforms in foreign direct investment or FDI norms with the sole motive of attracting more and more investors to invest in domestic businesses.

Businesses look at funds from foreigners because raising capital within the country can prove to be a difficult task. Foreign investors on the other hand are willing to invest in the Indian economy thanks to subsidized taxes and relatively cheaper wages.

In order to invest in India, an investor must know that there are broadly three types of Foreign Direct Investment (FDI):

Under vertical investment, a business that is differentiated to an extent is established in a foreign country.

Under this type of investment, an investor opens the same business in a foreign country.

Under the conglomerate investment type, an investment is carried out even if the business is unrelated or different to its existing business.

There are two ways by which a foreign investor can invest in India- the automatic route and the government route.