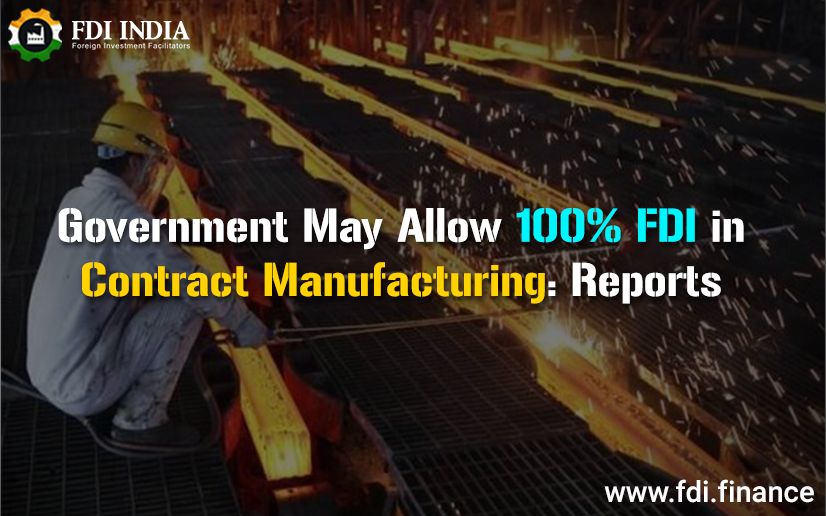 The government of India is contemplating to permit a 100 per cent foreign direct investment in contract manufacturing in order to give a boost to manufacturing in the country and to attract more foreign investments, sources said.

As per existing foreign direct investment norms and policies, 100 per cent FDI is permitted under the automatic route in the manufacturing sector. Apart from this, a manufacturer, without any prior approval from the government is also allowed to sell products that are manufactured in India via wholesale and retail channels, including through e-commerce. There is, however, no clarity on overseas investment in the contract manufacturing sector.

“The current policy does not talk about contract manufacturing and it is not clearly defined in the policy. Big technology companies across the world are going for this, so there is a need for a clarification on the matter which government is considering positively,” they said.

The commerce and industry ministry will be sending a proposal to the Union Cabinet for their approval.

Rajat Wahi, Partner, Deloitte India, commenting on the proposal, said the move if approved by the government will give a boost to the manufacturing sector.

“It is a welcome proposal for technology based companies like Apple,” he said.

Foreign direct investment in India decreased for the first time in six years by 1 per cent to 44.36 billion dollars in the fiscal year if 2018-19.

The government relaxed FDI norms to increase the FDI equity inflow as overseas investment is a significant driver of economic development. Apart from facilitating economic growth, an inflow of FDI also results in more jobs, better technology, improved infrastructure, and managerial know how.