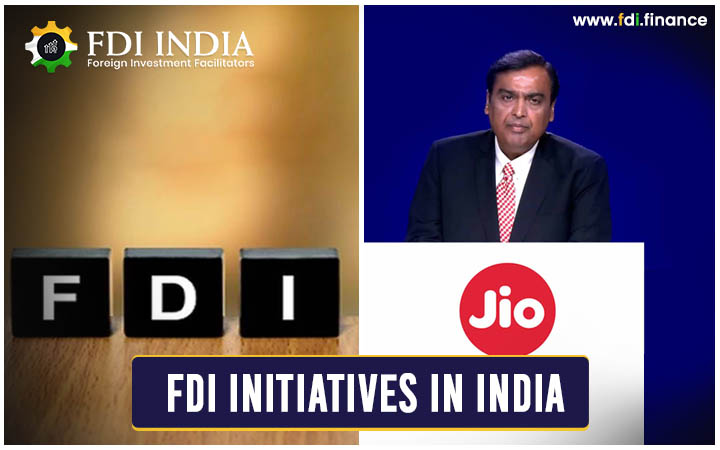 Over the years, the Indian government has liberalised its foreign direct investment policy in order to attract more and more investors. This is because, FDI is a critical driver of economic growth and is a significant non-debt financial resource for a developing country like India. On the other hand, foreign investors are willing to invest in the Indian market due to relatively lower wages and special investment privileges such as tax exemptions, etc.

As per the Department for Promotion of Industry and Internal Trade (DPIIT), foreign direct investment into the country amounted to USD 456.79 billion during April 2000 to December 2019.

Some initiatives towards FDI in india are outlined below:

Social media giant Facebook is all set to invest Rs. 43,574 crore into Reliance Jio for a 9.99 per cent stake, This is the largest foreign direct investment in tech sector.

In March 2020, government permitted non-resident Indians (NRIs) to acquire up to 100 per cent stake in Air India.

Amazon India announced in January 2020 an investment of USD 1 billion for digitising small and medium businesses and creating one million jobs by 2025.

The same month, Mastercard shared its plan to pour in up to USD 1 bn in the Indian market over the next 5 years.

In August 2019, Reliance Industries (RIL) announced its FDI deal with Saudi Aramco, where the latter will buy a 20 per cent stake in Reliance’s oil-to-chemicals (OTC) business at an enterprise value of USD 75 billion.