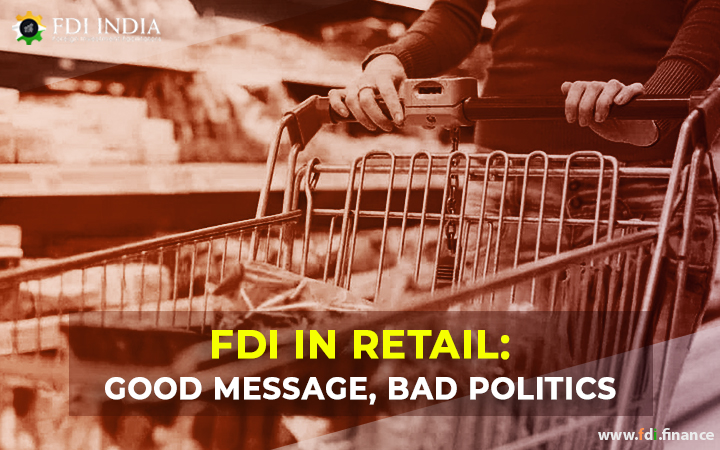 In the contemporary market economy, retailing is a connection between the producer and consumer. To maintain a strong relationship between the two, retailers not only offer a variety of products but also offer the utmost services to the customers. The retail sector is one of the powerful pillars of the Indian economy which is flourishing in the market at pace. India is considered as the place for shopkeepers as more than 15 million retailers are set up in the country. The liberalization of the FDI policy in the 1990s, the Indian economy has embraced many multinational companies to invest and obtain a humongous amount of foreign investment. The FDI in the retail sector has shown dramatic growth in the country. In 2013, the retail domain received the US $ 500 Billion, it was anticipated that it would reach up to the US $ 900 Billion in 2017. The government has introduced a new FDI policy in the retail industry.

According to the Department of Industry and Internal Trade (DPIIT), the government has allowed FDI :

This new policy is facing criticism from the opposition as well as the general public, the reason behind the criticism is that there are 95 % unorganized sectors which are adversely affected from the emergence of the e-commerce giant. In 2012, Mr Jyotiraditya Scindia tried to come in the favour of the government decision FDI, he stated that FDI would be beneficial for the customers as they can enjoy a good quality of good, best services as well as a wide range of products.

The cabinet approval on the 100 % FDI in retail through automated route has been playing a significant role in gaining maximum foreign investment. Also, it is increasing the ease of doing business in the country. Allowing 100% FDI in retail is a progressive step to captivate foreign investment and this would help generate employment and give access to the Indian customers to various international brands. The other reason for enhancing FDI was developing a large international supply chain and introducing the latest technology in the country. Global brands are offering various options to the Indian customers which would help improve the ranking of the Indian economy as well as simplifies the way of doing business.

The step of having 100% FDI in retail has become a serious issue for the small retailers as it can render unemployment in the country, but in the end, it is economic prosperity for the country.