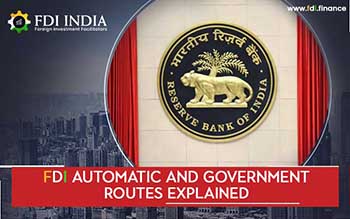 A prerequisite of FDI is giving the foreign investor at least 10 per cent voting rights in the day to day functions of the business.

Apart from being a critical driver of economic growth, FDI also bring in managerial know how, new job opportunities, an inflow of new technology, tech expertise and also results in improved infrastructure.

Foreign direct investment in India can be done under two routes.

Under this route, foreign direct investment up to 100 per cent is allowed in all sectors and activities except the following. The services listed below require prior approval of the government.

Sectors and activities that do not come under the automatic route necessitate a sanction from the Government of India and its concerned ministries.