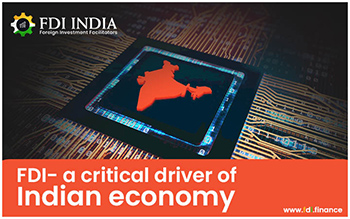 Foreign direct investment, in its simplest definition, is a type of investment by a foreign investor, into a business based in another country. One characteristic that differentiates FDI from FPI or foreign portfolio investment is ‘lasting interest’

Therefore, FDI is not just the transfer of funds to a business based in another economic market, it also controlling ownership and an interest into the activities of the business. To ensure controlling ownership, a foreign investor is given at least 10 per cent voting rights in the company.

Foreign direct investments play an important role when it comes to the economic development of India. FDI spurs economic growth especially when domestic saving are not enough to generate funds or capital investments. Even when borrowing from within the country is an option, most business tend to look beyond country lines for investments. This is because—1) capital is not readily available within the country, 2) interest rates are much cheaper when borrowing from oversea investors.

Ever since the opening of the Indian economy in 1991, there has been a steady inflow of foreign direct investments, varying slightly from one year to the other. The government also has done its share in encouraging more investments from time to time. An increased FDI equity inflow directly means economic growth or development.

FDI brings in capital supplement, but it is so much more than that. Apart from the money that it brings, it also brings new and innovative technology, a new business perspective, expertise, and knowledge and even leads to improved infrastructure in the country. FDI also helps in generating employment opportunities.

Foreign investors are also willing to invest in the country given subsidised rates and relatively cheaper wages. India also has a strong section of man power.

Nirmala Sithraman, the finance minister, first put these changes on the table during her maiden budget in the start of last year—2019.